I got interested in the anthropology of applause when I worked in Finland. Not professionally interested, like—though I do remember once hearing a paper which talked about co-ordinated audience applause rhythms with elaborate names at Roman games, with Imperial agents going around with sticks to beat people up who clapped out of time, which I have never ceased to find an appealing concept. But anyway, I’ve come to keep an eye on applause because there I was, back in 2005, newly started at the Helsinki Collegium for Advanced Studies, and it was the first of our weekly Collegium seminars, where fellows would gather from their array of disparate disciplines to listen in bafflement to one another and collectively to think great thoughts. I regret that I can’t remember what that illustrious first paper of the academic year was about, but it finished and, instinctively, I applauded. Because that’s what you do, right, in the UK, at the end of an academic paper. 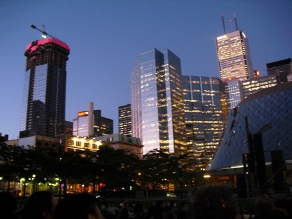 It’s not that my two hands clapping were met with stony silence, but there was a definite sense of, erk, what, one of the foreigners is clapping, what do we do? Er, better join in! And ever thereafter there was, at least in my imagination, this do-we-don’t-we tension over whether you should clap at the end of the paper. I’d forgotten that in Finland people mostly don’t.

I think I must, you know, relative to most people, like clapping: I often seem to start applauding before other people; I like the different noises you can make; and at graduation, I kind of view the clapping less as a chore and more as a good opportunity to practice. (For example, my left-handed clapping has, since I came to Leeds, got almost as good as my right-handed clapping.)

And since I came to Toronto, right, I’ve followed the Dutchman’s filmgoing and have been finding the city’s reputation for cinema well deserved. Day 17 was a free outdoor screening on this big inflatable screen in David Pecaut Square (no, I don’t know who he is), of Fiddler on the Roof. Not something I’d normally choose to see, but an outdoor movie in the middle of Toronto seemed a cool thing to do, and it was, with these spacy high-rise buildings around us and the clanging of the trams in the background. And actually a really amazing film too, rising above the lame pseudo-Ukranian accents and pedestrian plotting with some beautiful directing and a great ending. A few hundred people sitting outside in the warm evening to watch a film felt quite festive: some people evidently knew all the words, and there were these little showers of applause at key moments in the story (‘even a poor tailor is entitled to some happiness!’). And then there was a round of applause at the end. And I was, like, that was weird, I guess people were just pleased to have a film on outside for free. I mean, no-one claps after films in Britain, or Finland or Iceland, or as far as I remember Spain or France, which I think are the other countries where I’ve been to films. But then I’ve never been to a film outside in any of those countries. Maybe it’s different when you’re outside.

And then on Day 18 we went to the Center for Medieval Studies film night, to see Highlander. Which is, of course, such an incredibly bad film that the audience deserved to give themselves a round of applause just for sitting through it. Still, I was, like, hmm, is this a pattern? Or just a co-incidence? After all, some seminar room in the CMS is no more a proper cinema than David Pecaut Square. 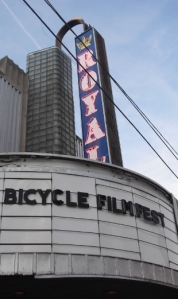 And THEN on Day 19 we went to the first screening of the Toronto Bicycle Film Festival, which was a series of short films, and people clapped after EACH ONE. And now I’m, like, wow, this must be what people do in Canada!

In a way I’m, like, who are we clapping to? Those people up there are just pictures, they can’t actually hear us. Or maybe we’re clapping to the guy in the projector booth? Or maybe it’s just that there’s something fundamentally lame about getting to the credits and just standing up and shaking off the popcorn crumbs and fishing your bag out from under the seat and leaving. I like clapping, and so far I like Canada.

I think my favourite film today was Le Tour de Kagawa, a seven-odd minute documentary in which five young Japanese gentlemen cycle from one place to another to eat udon (which I hadn’t heard of before). But alas, it doesn’t seem to be on Youtube, so here’s another bike short, featuring a couple of other places I’ve been recently (admittedly not by bike), through the recommendation of the Dutchman.