So I’ve been in Toronto more than a week now and it’s high time I said something about the place. It sort of doesn’t have a great rep: I remember my friend the Dutchman’s initial sense of culture shock when he first moved here more vividly than his gradual but thorough adaptation to the place; it’s the city Canadians (it appears) love to hate. Having lived in Glasgow, which is mostly on a grid system, I wasn’t really looking forward to North American cities: after four years, you start to yearn for a corner a little less or a little more than a right angle. And I was expecting to find it all quite alien.

View from the flat

But so far, my experience of Toronto has been great as a skate on a plate! I’ve only really seen a sort of 4×4km square (inevitably it’s a square), bounded by the lake in the south, Dupont St in the north, Yonge St in the east and Ossington Ave. in the west. This includes the lakeshore, the flashy financial district, the University of Toronto, Chinatown, Koreatown and Little Italy. So it’s hardly representative of, you know, Canada (area: 9,984,670km2). But I have walked a lot in this little bit!

As I said on my first day, the view from the flat (south-west corner of my square, looking east to the skyscrapers in the financial district) is distinctly foreign. It’s kind of impressive though. Admittedly, the lakeshore seems not to be able to make up its mind whether it’s an attractively over-sculpted leisure-and-jogging park or an interstate superhighway (a non-sceptical ex-pat assures me that if you know where to look, it’s lovely; but perhaps a non-sceptical ex-pat is really just a credulous ex-pat). And the main claim to fame of most of these skyscrapers is just that they’re big and shiny; and down at their feet you sort of feel a bit forgotten. OH, except there are, like, these vents in the pavement which let off these plumes of steam! And you stand on them, right, and suddenly you’re, like, eek, I appear to have walked into an invisible sauna, and your spectacles steam up even though it’s, like, 30°, and there amidst the traffic and the silly shiny buildings, you smell the sauna smell. Well, except without the birch. How weird! Is this some policy of some enlightened city mayor? A mystery.

On a further positive note, there are one or two skyscrapers which actually have a bit about them, like the Canadian Bank of Commerce Building (1929), one of the many fleeting members of that long, suspiciously circumscribed ‘used to be the tallest building ever’ list—this one, according to the plaque, was ‘upon completion … the tallest building in the British Empire’. Upon completion? It inched ahead when they put up the flagpole? There was a taller one in Bombay, but luckily it fell down just as the Candian Bank of Commerce Building was finished? It was overtaken the day after completion by some edifice in Hong Kong? Anyway, it’s quite attractive, in what I think of as an art nouveauy sort of way and has some nice inhabited vine scrolls.

But going north, to the university, Little Italy, Koreatown and the rest, where the Dutchman lives, and some Russian friends of mine, my big surprise is how familiar it all feels. It’s a c. 1920s bit of town, I suppose, and most of the houses are terraces and semis and could just be in Manchester or something. Well, a lot of them have these porches stuck on the front and the street furnishings look like they were shipped in from, I dunno, Estonia or something. But it feels homely. Thrupp and Griebel scores are almost unnervingly similar to southern British ones; if anything, downtown Toronto exhibits all round better gardening. (I’m sorry, I haven’t taken any photos of these. I didn’t think to because they look so, er, normal. You’ll have to look at the inhabited vine-scroll instead.) Even among the blocks of flats where the Goon lives, you get a bit of guerrilla gardening.

These actually have their own caption in real life: TO THE FLOWER CUTTER: IT WOULD BE GREATLY APPRECIATED IF I COULD RECEIVE A HAND FUL OF THE SEEDS SO THAT I CAN GROW THEM AGAI. THX

And there are loads of little parks. Admittedly, the Dutchman interprets the omnipresent slogan ‘A City in a Park’ as code for ‘sorry, we haven’t got a big park, just lots of little ones’. But Leeds has a big park, Roundhay Park, and I’ve never actually been: I guess if I’m going to schlep all the way over there, I might as well go out to the Dales or something. And the middle of Leeds has a real dearth of parks. So I think Toronto wins. And they’re well lit, and on these warm nights you get lots of people just peaceably hanging out in them. Reminds me a bit of Helsinki, except that Finns take a pleasingly less sculptivating attitude to park design.

And shops don’t seem to be centralised in downtown Toronto. The main streets will have different shops, cafe’s and pubs running all the way along; and each little district seems to have its own little cinema too. There’s day-to-day shops, and some shops you might make a point of going to, mixed in together. Predictably, I’ve hardly been in any. But that’s not the point. It’s that pretty much everywhere you go in my square, you have a sense that life is being lived. It’s groovy. 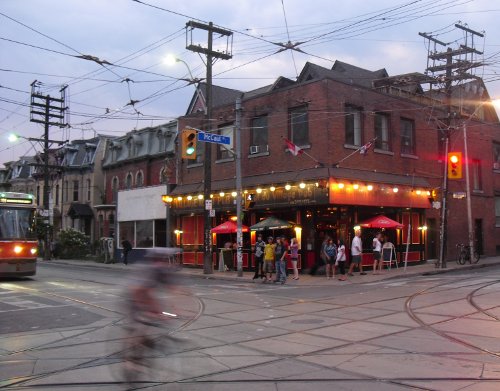 I know this is a rubbish photo. But it does have a tram in (just) and a bike (just), and some Manchester-looking buildings (sort of. Village Idiot Pub/L'Idiot du Village Pub). And Estonian-looking street-furniture.

And I was expecting either honking gridlock or hurtling freeways, but the roads are pretty peaceful. I am admittedly biased, because there are TRAMS! Who knows why, but I instinctively view trams as one of the highest marks of civilisation. Which slightly oddly puts Sheffield above, say, Edinburgh. But, you know, a tram is a tram. And to be fair, my perception of the calm traffic is probably a bit like when I first went to Helsinki, in August 2003, and I was, like, wow, this city is so quiet! You can run down the up escalator on the Metro EVERY DAY! And then I realised this was basically because it was the summer and everyone was away in their summer cottage. But just as Helsinki traffic is still pretty low-key when everyone comes back in the autumn (despite the Finns’ grumblings), I suspect that Toronto’s really is pretty peaceful (despite the Canadians’). I guess you can only go so fast in a country where there are traffic lights every two hundred yards. If guess if I was going to look for automobile dystopia, I could do a lot worse than just booking a ticket back to Leeds…

And when the Dutchman moved here, he was, like, man, no-one cycles here! It was all part of the culture shock, poor chap. But he was obviously comparing Toronto with the Netherlands. Because actually, loads of people cycle here. And the Dutchman is, like, ‘In Holland, if you don’t cycle then there’s something wrong with you. Here, just by getting on a bike, you become an activist.’ I like this idea. I always feel self-flatteringly heroic as I don my armour to face the Leeds traffic. And as the Bike Film Festival emphasised, Toronto isn’t short of bike activists (and they’re no doubt deservedly annoyed with the current petrol-head mayor). But really, downtown Toronto is in fact bikier than any British town I’ve seen since Cambridge. Probably bikier than Oxford. Lots of non-bikey looking people riding about. And the infrastructure isn’t bad: in Leeds finding a proper place to chain up your bike is about as easy as finding a tethering post for your horse. But here there are tons of them! And there are mostly quite a lot of bikes attached to them. The streets are wide. Drivers are forgiving. 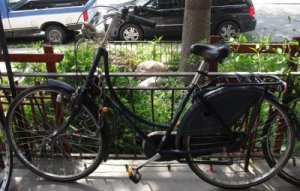 The Dutchman kindly lent me his wheels for a bit of sightseeing. Admittedly, his wheels are this twenty-kilo tank of a bike; the Dutchman himself borrowed a shiny yellow racer off his flatmate which weighed about as much as a pint of milk. But it was fun riding around.