Since it’s Veganuary, I thought it’d be interesting, as a long-standing vegan, to do a food-diary, and just in case it provides a useful perspective for anyone else, I thought I’d share it here. 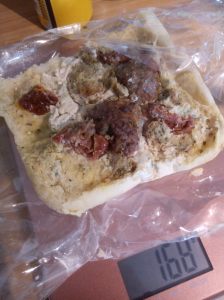 Bakery 164 sandwich during dissection. (They look prettier if you don’t take them apart!)

I more or less became a vegan in 2011. (I say “more or less” because at the time I cut myself various kinds of slack, like if I was travelling.) But I’ve never actually checked what my nutrient intake looks like. (Except a precautionary check one time to see if my vitamin B12 levels were okay, since vegans can only get B12 via supplements. The levels were fine 🙂 )

I managed to measure macronutrients in my diet quite accurately for five days before I lost momentum. Those five days were straightforwardly representative of what I eat. (Except that I didn’t have any peanut-and-banana toast during the survey. Not sure how that happened!) I mostly didn’t measure nutrition from drinks, but as these were mostly water and tea this won’t have made much difference.

Nutritional information was taken wherever possible from the packets of the food consumed. Otherwise, it was mostly taken from www.eatthismuch.com, though I also had a look at other sources, such as Wikipedia. I weighed ingredients as I went along, and even dissected my staple lunch, a humous and falafel sandwich from the Leeds institution that is Bakery 164, in the name of science.

Since I don’t know much about nutrition, I don’t actually have any very intelligent musings on these figures (informed comments welcome below!), but the average figures for the five days set against the UK recommended daily amounts (RDA) were:

And here are a few of my vital statistics for context (according to our common-or-garden bathroom scales):

I was mostly interested to see that I’m getting plenty of protein and not taking in too much carbohydrate in doing so–something people always worry about with vegan diets. Tons of fibre (though there’s no RDA for that). The 401.8 grams of fruit and veg looks uncannily like I planned it, but I didn’t (and someone told me that I should really be aiming for eight-a-day). And who knows, maybe the extra fat and protein make up for the dearth of sugar?

WordPress seems not to cope well with big tables, so click here to view the five-day food-diary of a vegan as a pdf file, and here to download it as an .xls spreadsheet.